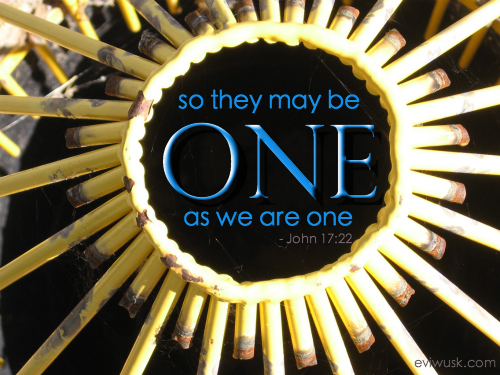 Scene 1: Five summers ago as a camp counselor. . . Sixteen left feet fail to synchronize yet again as one middle school camper lifts the wrong leg and sends his whole group off balance.  They topple into a pile of giggles. . . and they get to start over with the Co-Op(eration) challenge. . . again.  Each time I would pull out the 10-foot extended-square planks, thick ropes swinging off like centipede legs, I would wonder, “Will this be the group who never gets it?  Who knows, maybe they’ll take it like a toddler to Cheetos.”  Repeated rocky attempts usually would meander through fits and starts and finally meld into a smooth group action, usually led by a group vocal chant.  The many would become one.  Smiles would seep across faces as each began to realize more with each lugging step, “We’re doing it.  We’re doing it!”

Scene 2: At the farm with family this afternoon. . . Spring is flambuoyant with Mother’s day tulips.  Some arrive early, some late.  Numerous mis-matched chairs and garden chotchkeys dot the gathering space bordered by the sprout-lined garden and home.  We gather, each one moving a bit slower with jovial greetings and banter.  My one-year-old is met with smiles and adult voices, sweetly high pitched.  Later, sun is bright and her giggles bounce from the trampoline.  Following my toddler at a family event can leave me drained, but today the tightness in my normal response loosed as grandmas, aunts, grandpas, uncles, and cousins stepped in, tagging one after the other for a delicious dose of one-year-old energy.  Wanting to be a good mom, my eye is always out, ready to respond when needed, but the steady and strong hand of one family lightens my load with a stamina that can outlast even the most energetic little one.

Scene 3: This morning as an adult in my childhood church . . . I lick my finger to pinch the graying pages of the green country church hymnal.  My turning lands on the hymn: For all the Saints, a familiar title, but the eight verses line up before me like a sink filled to overflowing with dirty dishes.  I take a deep breath and ready myself for the long haul, praying for the organist to pick a fast tempo.  The familiar tune ignores my unwelcoming reception and leads me to verse after verse connected like links on a chain.  I see saints in a spiritual battle.  They take up arms.  They endure.  The battle swells, and I stop singing. . . I can’t for the lump in my throat as “the strife is fierce. . . and hearts are brave again.”  Brave hearts endure the test.  They emerge melding into a crescendo of voices, each different and yet the same, swelling to glory singing the only fitting word, Alleluia.  And my little Alleluia becomes part of one bigger voice, and it doesn’t seem little at all.

Final Scene: The not too distant future or past . . . I scroll Facebook and Twitter and read passionate polarity growing.  I think on life experiences that have led to posts that cause me to bristle, I try–and fail–to get behind the eyes and hands that typed.  Instead, I scroll more quickly, lingering on train wrecks for all the wrong reasons.  I wonder on the possibility of a digital diet that brings together, one that nourishes.  I hesitate, hating the word “de-friend,” but I click, and somehow smile and frown all at once.

View all posts by Evi Wusk

2 thoughts on “so they may be one”